To share your memory on the wall of Kevin Tritz, sign in using one of the following options:

In high school, during the summers, Kevin worked as a golf caddy at Minnesota Valley Golf Course in Bloomington, and the experience instilled in him a love for the intricacies of the game. He continued to play golf as he underwent chemotherapy treatments for pancreatic cancer last summer. His love of golf was grounded in the fellowship and camaraderie he enjoyed on the golf course.

Kevin began his lifetime career in the environmental industry in 1969, hauling garbage for Woodlake Sanitation, which later became a part of Browning-Ferris Industries (BFI). He began his management career for BFI as a district manager in Des Moines, IA in 1977. Under the direction of Ed Drury, Kevin learned the philosophy that “[garbage] is a people business.” Kevin took these words to heart for the rest of his life, by establishing open, honest and trust-based working relationships with customers at all levels.

In 1987, Kevin relocated to Minnesota and served as the District Manager of BFI Woodlake Sanitation in the Minneapolis/St. Paul markets. During the late 1980s, aggressive public policy developed recycling and resource recovery goals and mandates that heavily impacted the existing structure of the solid waste industry. Kevin had a unique talent for working with the communities that BFI served and gained support from cities and counties for modernizing the landfill, implementing the collection and composting of yard waste and introducing Minnesota’s first successful collection program for residential source-separated recycling. He was one of the first in his industry, to identify waste segmentation as a major marketing opportunity and recognized that pending environmental policies would require waste service providers to rethink waste stream and processing. The resulting segmentation led to the recycling and composting systems used today and adapted nationwide.

As his career developed, Kevin became recognized nationally as an innovator and creative force in the, organics, recycling and composting industries. After leaving BFI, he joined SKB Environmental as the VP of Composting Operations and proceeded to site, build and operate one of the first commercial food waste, source separated, organics composting operations in the country. 1999, he and his business partner, Kevin Nordby, established Specialized Environmental Technologies (SET), which continues to lead the way nationally in the composting and organics industry.

Kevin served 2 terms as president of the US Composting Council and helped its membership grow from a fledging organization into a strong national organization that provides support and shares best practices for its over 600 members today.

He loved vacationing in the Rocky Mountains with family and friends. In recent years, Kevin especially enjoyed spending time in Steamboat Springs, CO, skiing and snowshoeing in the winter and hiking, biking and golfing in the summer.

He will be remembered for his integrity, congeniality, humility, leadership and his self-deprecating sense of humor. Most importantly, Kevin will be remembered for his devotion and faithfulness to his wife, children, grandchildren, family, friends, colleagues, and especially, to God. He consistently chose the higher good over personal gain in all aspects of his life.

Following a diagnosis of Stage 4 pancreatic cancer in May, 2019, Kevin exceeded predicted survival expectations. He accepted his illness with courage, grace and faith.

He is survived by Suellyn, his wife of almost 50 years; children, Natalie Fowler (John), Aaron, Ryan (Jennifer); grandchildren Avery, Luke and Isabelle Fowler; Jonah and Harrison Tritz; and Gavin, Andrew and Madeline Tritz; brother Ken (Liz), and sister Karen Morrison (Bill). Kevin will be missed dearly by his “other brother,” Kevin Nordby, along with many dear friends and extended family.

A Mass of Christian Burial will be held in compliance with MN COVID-19 requirements, on Tuesday, August 18, at 11:00 AM, Our Lady of the Lake Catholic Church, 2385 Commerce Blvd, Mound. Visitation will take place at 10:00 AM, with internment immediately following Mass, at Our Lady of the Lake Cemetery.

The funeral Mass will be live-streamed and is accessible here: https://perkinsmediagroup.com/tritz/ In the event of technical difficulties, the video will be posted as soon as possible.
The MN Composting Council has established a scholarship in Kevin’s name, which will be used for education and research. Memorials preferred to the Kevin Tritz Memorial Fund at http://www.mncompostingcouncil.org/

Kevin was a registered organ donor and despite the toll his cancer took on his body, it was amazing to learn that he was able to give the gift of sight to two people. Perhaps the lesson here is that even though we may think we have nothing left to give, sometimes we do. If interested, memorials are suggested to https://www.life-source.org
His family is grateful to family and friends who supported them with healing thoughts, prayers, cards, emails, calls and texts during his lengthy illness. Kevin knew he was loved, and now we all have a golf pal, friend, husband, brother, dad, grandpa on the other side to help us walk our own earthly journey.

Kevin’s family also has immense gratitude for his caregivers and doctors throughout his illness, especially to the Ridgeview Hospice staff, who helped the family care for him at home.
Read Less

We encourage you to share your most beloved memories of Kevin here, so that the family and other loved ones can always see it. You can upload cherished photographs, or share your favorite stories, and can even comment on those shared by others.

Posted Aug 20, 2020 at 06:51pm
Suellyn, Ryan and all, My sympathies on the passing of your husband, your father. I had the chance to see him in the hospital in the last couple of years, and of course at Our Lady of the Lake during my time there. He contributed to the world in many ways, often ahead of the curve. Please know of my prayers.
Comment Share
Share via:
RF

Posted Aug 17, 2020 at 10:14pm
Wishing you peace to bring comfort, courage to face the days ahead and loving memories to forever hold in your hearts. We are so sorry for your sorrow

Posted Aug 17, 2020 at 11:12am
You are all in our thoughts and prayers! From: Hermans Landscape Supplies

Posted Aug 17, 2020 at 08:16am
Please accept our heartfelt sympathy for the loss of a true Gentleman. Our thoughts are with you and your family. Your friends at ReGen waste Ireland 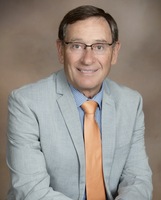