To share your memory on the wall of Joanne Ashenfelter, sign in using one of the following options:

Print
Joanne K. Ashenfelter, 67, died peacefully on February 28, 2020, in Spring Park, MN, after a courageous 2 year battle with bile duct cancer. She was surrounded by family as the angels came to carry her soul to her Savior.

Joanne was bor... Read More
Joanne K. Ashenfelter, 67, died peacefully on February 28, 2020, in Spring Park, MN, after a courageous 2 year battle with bile duct cancer. She was surrounded by family as the angels came to carry her soul to her Savior.

Joanne was born April 5, 1952, to Edwin and Marcelina (Garbuio) Antosik, in San Mateo, CA. Summers spent at the Lake Tahoe family cabin fostered her lifelong love of swimming and the outdoors. She attended Burlingame High School where she was Peter Panther, the school mascot. Joanne met her husband of 46 years, Timothy P. Ashenfelter at the local Safeway grocery store. They married on September 1, 1973, and later both graduated from Cal Poly in San Luis Obispo, CA.

When Joanne and Tim moved to Mound, MN in April, 1976, she became a Lake Minnetonka girl. Later, their second home on Madeline Island led to endless hours exploring the Apostle Islands on Lake Superior. The couple raised their 3 children in the Westonka Community and opened their home to countless people who have become lifelong family friends. Joanne enjoyed hosting all types of celebrations and had a more-the-merrier mentality. She was known to many for her famous chocolate chip pancakes and cookies—some of her grandchildren’s favorites.

Joanne was a professional Home Economist working first at Pillsbury, then later at General Mills as an independent contractor. She worked in this capacity for over 40 years and was in high demand for her many specialties including developing new products and recipes in test kitchens, supporting the Pillsbury Bake-Offs and traveling the world for food photography and television commercials.

Joanne was a woman who was adored by all. She was constantly loved by her family, friends, co-workers and caregivers for her infectious smile, kind heart, endless generosity, positive nature and fun sense of humor. She faced the devastating news of her cancer diagnosis with grace, courage and optimism. Joanne was an inspiration to everyone she came in contact with and felt so blessed with the life she lived. She will be deeply missed by those who knew her, but her wonderful spirit will live on forever.

** Due to COVID 19 restrictions a Celebration of Life for Joanne will be held at a later date.**

Donations can be made to the Children’s Cancer Research Fund (https://childrenscancer.org/
Read Less

Print
** Due to COVID 19 restrictions a Celebration of Life for Joanne will be held at a later date.**

We encourage you to share your most beloved memories of Joanne here, so that the family and other loved ones can always see it. You can upload cherished photographs, or share your favorite stories, and can even comment on those shared by others. 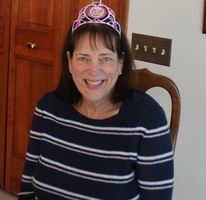