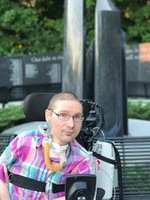 Todd Jeffrey Webeck was born on January 27, 1972 in Rochester, MN to Dianne Lynn Webeck (Sweazey) and Marlin Steve Webeck. At the age of four he was diagnosed with Duchenne Muscular Dystrophy. Todd enjoyed a relatively happy, normal childhood until the summer of 1980 when he walked into MDA Summer Camp and was unable to walk out at the end of the camp week, From then on he was in a wheelchair. In 1982 he was selected to be the Jerry Lewis MD Telethon Poster Child, such a wonderful experience.
Todd was an avid (obsessed) sports fan throughout his life. Cheering and weeping for all the Minnesota College and professional teams. He played adaptive hockey and bowling in high school.
Todd graduated from Rochester John Marshall High School in 1990. In 1999 he graduated from Mankato State University, after many long hospital stays, with a Bachelor of Science in Economics degree. After graduation he moved to an apartment in Hopkins, Minnesota and went on to earn his MBA degree from the University of St. Thomas, Minneapolis, MN. in 2012.
In 2013 he met Maria Antoinette (Jennet) Nabor of the Philippines online while working in Vietnam as a factory supervisor. On September 5, 2014, Todd and Jennet were married in a civil ceremony in Minnetonka, MN. Jennet brought joy and purpose back to Todd and they enjoyed a happy and active life together.
On May 19, 2019, Todd was admitted to Methodist Hospital with a lung infection. He slipped into a coma and died quietly on May 30, 2019 with his wife and mother at his side. May God rest his eternal soul.
Todd is survived by his wife Jennet, mother Dianne, father Marlin (Butch), stepfather Victor, Grandmother Esther, uncles, aunts, nieces, nephews, cousins and so many friends.
Now he walks with God.

In lieu of flowers, donations to the family.