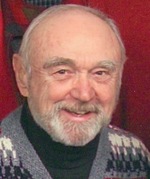 Glenn Alfred Froberg of Chanhassen, age 92, passed away on April 8, 2019. Glenn enlisted in the Navy at age 17 and served on the Badoeing Strait Aircraft Carrier during WWII. He continued in the Naval Reserves for 20 years. After graduating from Northwestern University, Glenn married Virginia Gray Williams. He worked for Motorola for 20 years in engineering, production and as a sales executive before entering William Mitchell College of Law. Glenn earned his Juris Doctor in 1972 and subsequently established a private legal practice in Minnetonka, MN. Before retiring from the law at age 80, Glenn served as attorney for the city of Shorewood, MN, and referee for the Hennepin County Conciliation Court. Glenn was also mayor of Tonka Bay for 2 terms. His hobbies included boating on Lake Minnetonka, swimming at Williston Fitness Center, and flying his private plane, for which he achieved instrument rating. He belonged to Rotary, 8th Airforce Historical Society, American Legion, and VFW. Glenn was devoted to helping others and he volunteered his time with Courage Center, Legal Aid Society, Meals on Wheels, ICA Food Shelf, and Habitat for Humanity. He is survived by his wife, Virginia, daughter Debra (Gary Christensen), daughter Jacki Troxel (Ron), son Bill (Nan), six grandchildren, and two great-grandchildren. He was preceded in death by his parents and a grandson. The family will receive friends from 2:00-4:00 on Saturday, April 27 with a memorial service to be held at 3:00 at Huber Funeral Home, 16394 Glory Lane, Eden Prairie, MN. As a memorial to Glenn, please bring non-perishable food items for the ICA Food Shelf.
Huber Funeral & Cremation Services
Eden Prairie Chapel 952-949-4970