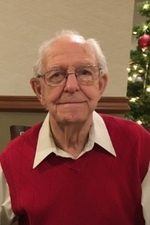 Age 88 of Anoka, MN passed away on March 8, 2019. Preceded in death by parents Magnus and Mayme Erickson and sisters June Duerr and Berdetta Gardner. Don was welcomed into Heaven by granddaughter Jenna Grace Paschke. Don was born in McIntosh, MN on June 12, 1930. His family moved to Anoka when he was nine years old. Don graduated from Anoka High School in 1948, where he began his illustrious basketball career and played on a state championship team. He went on to play basketball at Iowa State Teacher’s College, where he was a stand-out guard standing only 5’9’’ tall. Don earned his teaching degree in 1952 and then enlisted in the army during the Korean War. He proudly served his country as a sergeant, while stationed in Chicago, Don married his sweetheart, Lillian, while on a three day pass on March 28, 1953. Lillian joined him in Chicago to finish out his service. The couple returned to Anoka in 1954, where Don began a long career as a custom woodworker. He was a master craftsman who could figure anything out with wood. Don was a lifetime member of the American Legion, Post 102. Don is survived by his dear wife, Lillian, his daughters Linda Erickson (David), Laurie Williams (Jeff), Kris Prince (Steven), Holly Paschke (Steve), eight grandchildren and five great grandchildren. A funeral service for Don will be held on Wednesday (3/13) at 11 AM at Mount Calvary Lutheran Church, 301 County Rd. 19, Excelsior with visitation starting at 10 AM. Interment at Fort Snelling National Cemetery at 2:00 p.m.