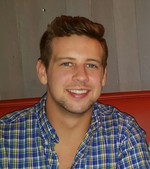 Alexander Allen Chadwick, known to his many friends simply as “Chadwick”, passed away suddenly on January 24, 2019 at the age of 24.

Alex was born in St Louis Park, Minnesota, on August 6, 1994. Alex attended Farmington High School, graduating in 2015. While in high school, Alex was a three-sport athlete and Homecoming King. His high school years were some of the best memories of his young life. He was looking forward to graduating from Winona State University this May with a major in Business & Marketing.

Although Alex’s time with us was much too brief, we are comforted by the fact that he lived his young life full of joy, he was able to travel the world, and was surrounded by love from his family and his many friends.

Alex will be missed dearly by his family. He is survived by his parents, Joel and Sondra and sister Sofia. He also leaves behind his maternal Grandparents Allen and Janet Weick and paternal Grandparents Laurie Roebuck and Dorothy Chadwick; Great-Grandparents Bette Weick and Dorothy Chadwick. Maternal Aunts and Uncles Tony & Monica Weick, Michelle & Tom Gronwold, Christine & Brad Rindfuss; as well as his beloved cousins Gabriel, Meg and Rose Pralle, Zoe and Max Gronwold, and Taylor and Nate Weick. Alex was preceded in death by his Great-Grandparents Merle Weick, Francis Wilton (Tony) and Mae Johnson, and his paternal Grandfather Jim Chadwick

An open house celebration of Alex’s life will be held on Saturday, February 2nd from 12 - 3pm at Pique Travel Event Space on 306 Water Street, Excelsior, MN 55331