To share your memory on the wall of Melvin Cole, sign in using one of the following options:

Provide comfort for the family of Melvin Cole with a meaningful gesture of sympathy.

Mel was born on July 2, 1922 in Minneapolis to parents John and Irene [Westerfelt] Cole. Mel lived with his family until his mother was placed in a home and his father moved the family to Cass Lake to raise them. This is where his love of the outdoors and of all people began.
Mel's father passed away while he was still very young, so Mel and his brothers where taken in by aunts and uncles in Excelsior. He graduated from Excelsior High School as a scholar and a printer, as he worked in a local printing press in Excelsior.
Mel enlisted in the Navy, and proudly served as a Merchant Marine during WW II.
He loved to talk about his word travels during the war and the wonderful people he met. He also served in the Japanese theater, those days he spoke of less often.
After the war he met Margret Fisk, they soon married and put down roots in the Excelsior – Shorewood area where they raised two boys, Dale and Charles.
Mel worked hard and his life revolved around his family. Mel has a very kind heart and was always willing to help others. He was always ready with a joke or something to lift your spirits.
Mel is survived by his sons, Dale (Maurine) of Duluth, and Chuck Cole of Golden Valley; grandchildren and great grandchildren.
Mel is preceded in death by his parents, John and Irene; brothers, Frank, Donald and Jack; sister Jeanette; and his wife Margret Fisk Cole, the love of his life.
Read Less

We encourage you to share your most beloved memories of Melvin here, so that the family and other loved ones can always see it. You can upload cherished photographs, or share your favorite stories, and can even comment on those shared by others.

Posted Jan 30, 2019 at 10:34pm
Chuck and Dale,
So sorry to hear about your father. My mom Ema Anthony was also at Minnetonka Assisted Living for a short time so got to see and speak to him. I did give him a picture of your mom from years ago. My dad pasted in 2016 but my mom is still living in a Memory Care Unit in Waconia. She will be 95 in April. Your cousin, Debbie Anthony Ebert.
Comment Share
Share via: 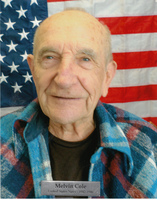