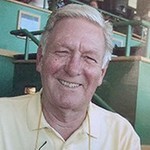 Edwin M. Lanning, age 85, passed away peacefully at the Estates of Excelsior on April 19, 2018. Services will be at the Huber Funeral Home in Eden Prairie on April 25, 2018 followed by graveside services at Fort Snelling.

Ed was born on December 1, 1932 in Des Moines, Iowa. He graduated from Park Rapids High School in 1949 and served in the U.S. Army from 1950 to 1951. He also received and Associate of Arts Degree from the University of Minnesota.

Ed married Joan A. (Vorgert) Lanning in 1959 and lived in the Minnehaha area of Minneapolis until they built their home in Brooklyn Park. In 1975 they moved to Brooklyn Center. Ed retired from MCI Communications in 1993 and lived in Eden Prairie, Minnesota. He spent his winter months in Arizona, golfing and hiking in his favorite spot, the Superstition Mountains. In his earlier adult years he enjoyed hunting and fishing.

Ed was predeceased by his wife Joan, daughter Stacey, and son-in-law Robert. He is survived by his daughter Christine Bruemmer of Sartell, step children and step grandchildren.

Extending a special thank you to the caring staff at the Estates of Excelsior and to the Brighton hospice team for helping Ed to feel at home and well cared for. In lieu of flowers, memorials preferred.

Funeral services will be held at the Huber Funeral Home in Eden Prairie on April 25, 2018 beginning with visitation at 10:30 a.m., a memorial service, luncheon and then graveside services with military honors at 2 p.m., Fort Snelling.