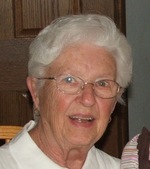 Carol Jean Swanson Heyerdahl was born on September 5, 1926. She was the second of seven children born to Pearl and Luther Swanson. Carol married Earl Heyerdahl in 1948. They raised their three children and two Golden Retrievers in Minnetonka where the Heyerdahls were members of Minnetonka Lutheran Church.

Carol enjoyed cooking, hosting Christmas for her extended family, painting ceramics, needlework, gardening, golf, Swanson Family reunions for over 40 years, and being a snowbird…but coming home to her family was always the best! Grandma Carol loved babies and was blessed to snuggle 7 grandchildren and 10 great-grandchildren. Carol and Earl enjoyed travels to the Scandinavian countries, Europe, Canada, the Caribbean, the continental United States, Alaska and Hawaii. They also were huge fans of the Vikings with 40-yard line season tickets for years!

After 52 years in the home they built in Minnetonka, Carol and Earl moved to Presbyterian Homes in Spring Park, and they have resided there since.